CardDAVServer.NtfsStorage is a contacts server example that runs on IIS or IIS Express. It is validating user credentials against Windows Active Directory or local Windows accounts and can be configured to use Basic, Digest or Integrated Windows Authentication. All contacts data is stored in the NTFS file system.

This sample stores vCard data in the format submitted by the client application as a plain text stream inside a file. When iOS / OS X client requests a contact data, the vCard is converted to the format understood by Apple contacts, including conversion of e-mails, telephones, URLs, addresses, instant messengers, etc. and its labes.

If the contacts file is created by Apple client and contains non-standard properties and parameters, the vCard is converted into standard vCard format when output is generated, so its content could be corresctly interpreted and displayed by the non-Apple CardDAV client.

To run this example you will need:

Because this sample uses TAP interfaces you need .NET 4.5 or later to run it. If you need to support .NET 4.0 or 3.5 use the 'ASP.NET CalDAV/CardDAV Server Application' wizard or other WebDAV wizards in Visual Studio and select .NET 4.0 or .NET 3.5 in a New Project dialog.

To run the example, you will need a valid IT Hit WebDAV Server Engine License. You can download the license here. Note that the Engine is fully functional with a trial license and does not have any limitations. The trial license is valid for one month and the engine will stop working after this. You can check the expiration date inside the license file.

Place the license file in the root folder of the contacts server cxample (\Samples\CardDAVServer.NtfsStorage\).

The files are stored in the file system in \Samples\CardDAVServer.NtfsStorage\App_Data\WebDav\Storage\ folder. You can change the storage location in RepositoryPath tag in web.config.

Running the Sample from Visual Studio

If you have Visual Studio, the simplest way to run the sample is to run it from Visual Studio. In this case, you do not need to configure the web application in IIS.

Run the Visual Studio with Administrative privileges (required for IIS Express impersonation, see below) and open the project. In the project properties, you will see that this sample is configured to use Windows authentication:

Run the project from Visual Studio. The web browser will be opened and request for authentication. You will provide your Windows account credentials: 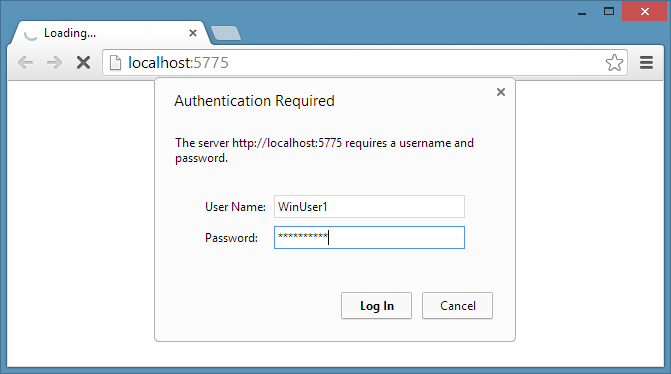 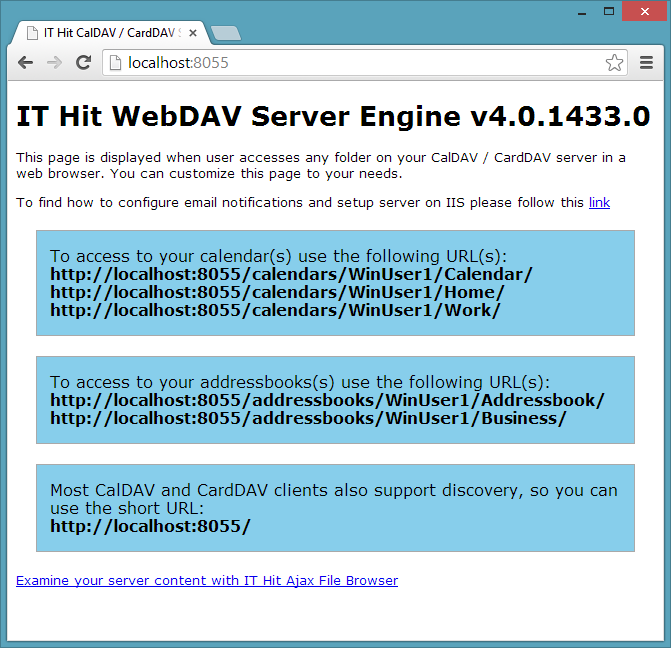 To find out how to connect to your contacts server from various CardDAV clients see: Connecting to Your CardDAV Server article. 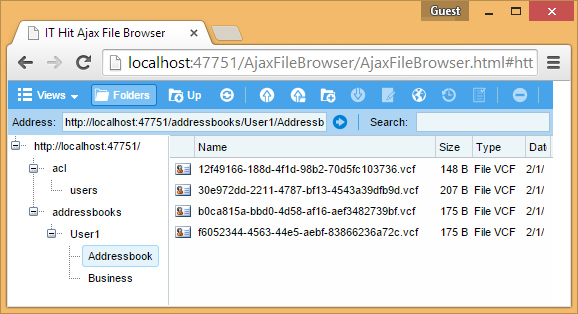 Note that to be able to see the above folder structure, the user that you used to log-in to the website must have List Folder Contents permissions in your \Samples\CardDavServer.NtfsStorage\App_Data\Repository\ folder.

On the above screenshot, you can see the several .vcf files. Each file represents a vCard contact while the folder itself represent an address book. These files were created by the CardDAV client, you would not find them before you connect with a client application and create contacts.

Note that ACL folder and its content is not present in the file system, it comes from your Active directory or local Windows accounts.

To create initial address books as well as for other file system operations this sample is using impersonation. In case you run your project in IIS Express and log-in to your web application as the user that is different from the one running Visual Studio (and IIS Express) the impersonation will fail. If after the log-in you get the error, consider the following: 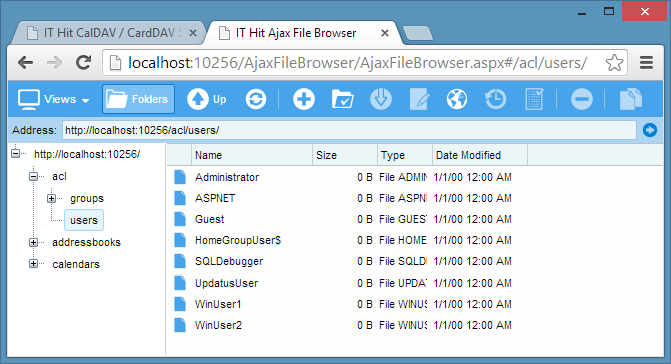 Deploying Your Contacts Server to IIS

Follow the steps below to deploy the contacts server sample to IIS 7 and later:

Optionally, to be able to connect with iOS Contacts applications faster on iPhone and iPad, configure SSL with a self-signed certificate on default SSL port 443, as described in Configuring SSL on your WebDAV Server Running in IIS.

ASP.NET WebDAV Server Example with Microsoft SQL Back-end, C#
Cookies
This site uses cookies and similar technologies to offer you a better browsing experience, for analytics and measurement purposes and to provide social media features. Cookies are also used to develop and serve targeted ads and for similar purposes.