To see in details how it works let's create ASP.NET Web Application. For the sake of simplicity, to minimize the amount of configuration required for this demo, we recommend Microsoft SQL Express to be installed before running the wizard. 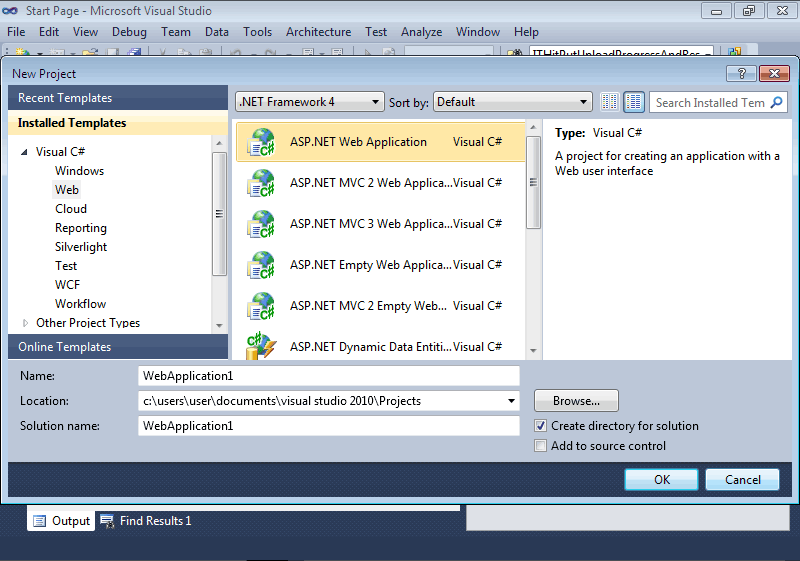 Finally, click 'OK'. You can also add WebDAV to other project types, for the list of supported project types please refer to this page. 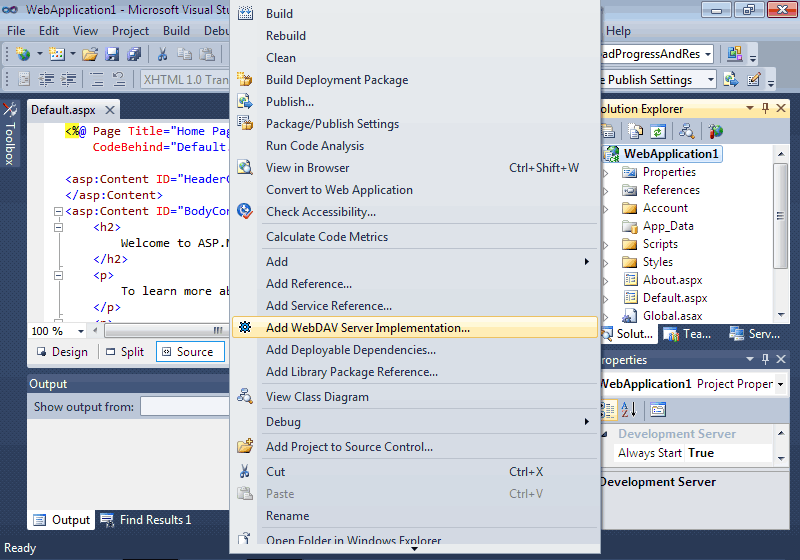 On the first step, you will specify the URL of the folder where WebDAV will be enabled. 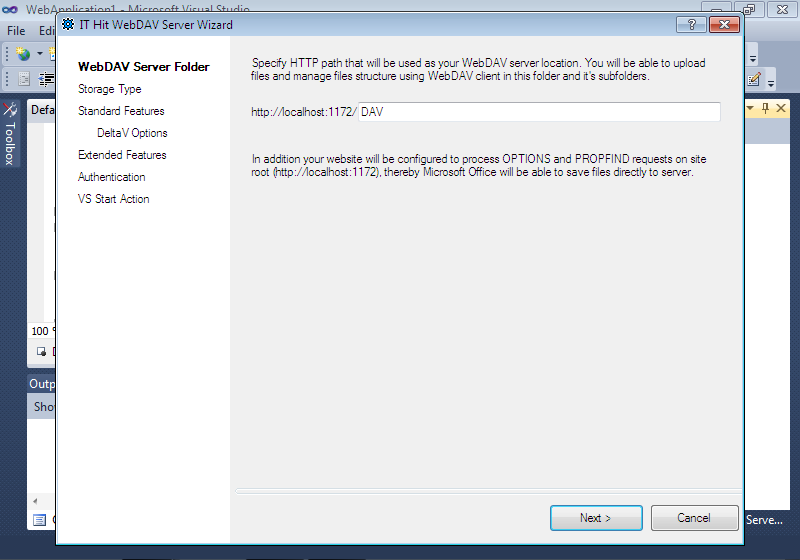 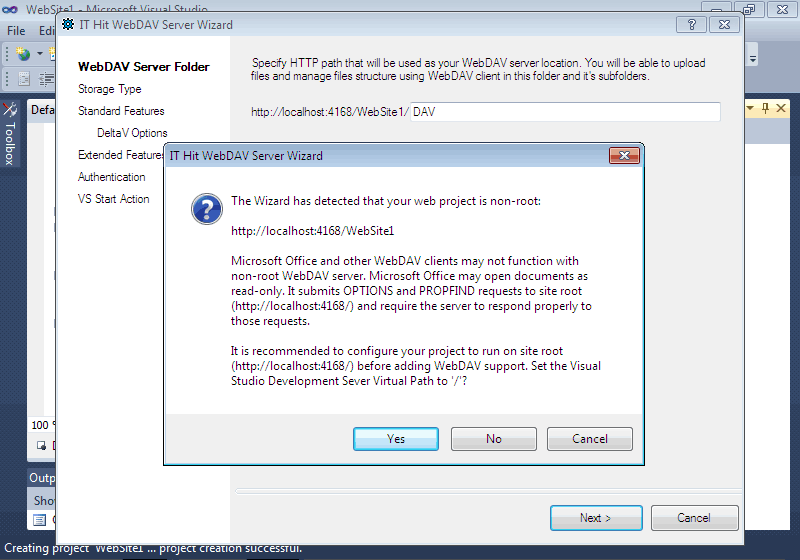 In case your project is hosted in IIS there is no way to automatically remap the project to site root, you will have to cancel the wizard, remap site root manually in IIS and in project settings and then start the wizard again.

On this step, you can specify not just a single folder name but entire URL, for example 'My Folder/dav/docs/'. In this demo, we will leave the default 'DAV' value here. The path that you specify here will be created in your storage and will be specified in <location> tag in web.config:

If later you decide to change the name of WebDAV folder you will have to change both values of the path attribute in <location> element and change it in your storage.

The <location> element contains configuration for your WebDAV folder. The major element that you can find here is your WebDAV handler, that processes all WebDAV requests, it is implemented in WebApplication1.WebDAVServerImpl.DavHandler class. As you can see, it is specified twice, in <httpHandlers> element, that is used in IIS Classic mode and in <system.webServer> element that is used in IIS Integrated mode. As soon as all requests to /DAV/ folder are processed by DavHandler class, all other handlers are not necessary and are removed by <clear> element.

The <security> element removes all limitations in /DAV/ folder. As soon as all files are created in your storage you can allow folders with 'App_Data', 'bin', etc names as well as files named web.config, etc. Note that in all other folders of your website, as well as on the root the security settings are not modified.

The <location> element can't contain modules, they are allowed only at the application level. That is why you will find the ITHitPutUploadProgressAndResumeModule and ITHitPostUploadProgressModule specified for entire website, rather for /DAV/ folder only.

To process OPTIONS and PROPFIND requests on the site root the wizard have added the following two entries into your web.config for Classic and Integrated mode:

The requests are forwarded to your handler implementation in DavHandler class and you must process them in the manner you process all other WebDAV requests. You can find more about how Microsoft Office opens files from server here and about the Microsoft Office read-only issue here.

In addition, to make proper authentication configuration OPTIONS request is always left unauthenticated (including the site root). This is not an error or bug. If the OPTIONS will request authentication, connections from some WebDAV clients, will fail. 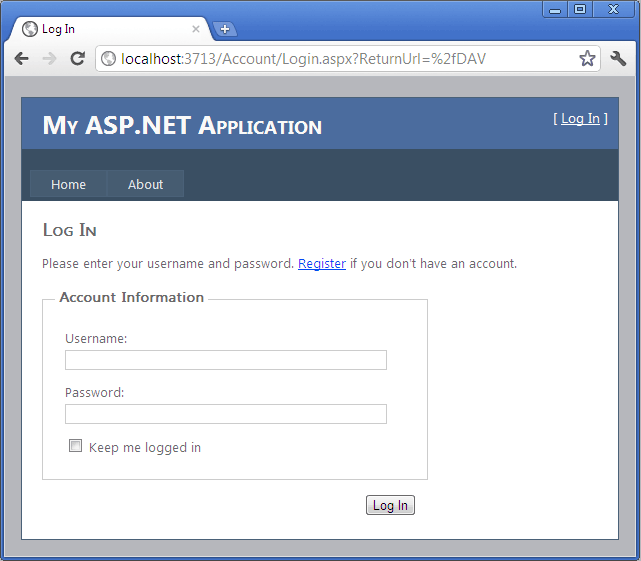 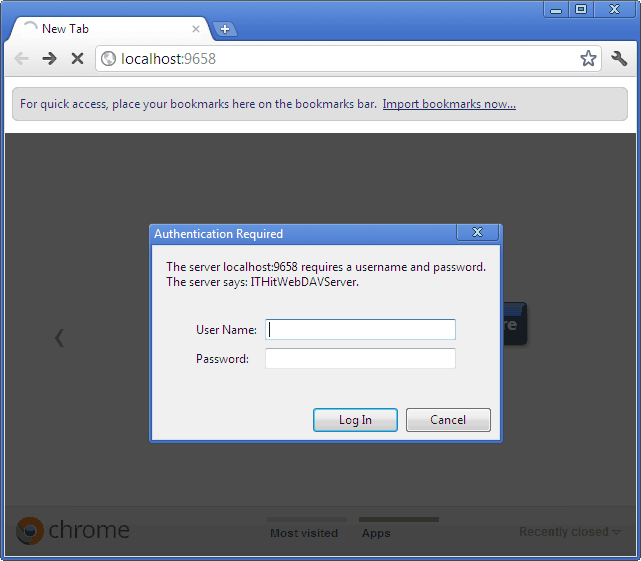 On the other hand, when creating a web page that contains hyperlink to a document located on a WebDAV server you do not want the pop-up browser login dialogs, such as shown in the right image. Instead, for consistent user experience, Forms/cookies authentication should be used seamlessly. If user already authenticated, his existing authentication token should be used and he should not be redirected to the login page.

To demonstrate how mixed authentication works let's move to Authentication step and Select 'Digest' authentication option. While all options on this step are similar to ASP.NET WebDAV Server Application wizard, the generated code contains significant differences. 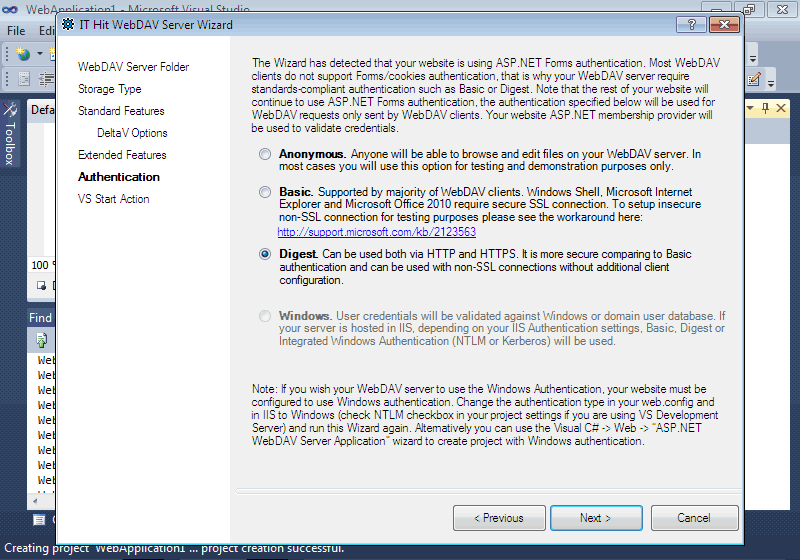 If no membership provider is found in web.config, the Basic and Digest authentication options will be disabled on Authentication step.

As soon as Digest authentication requires password to be retrievable from your storage, the wizard will analyze your membership provider options in web.config and if it detects that password is not retrievable it will offer to set appropriate options: 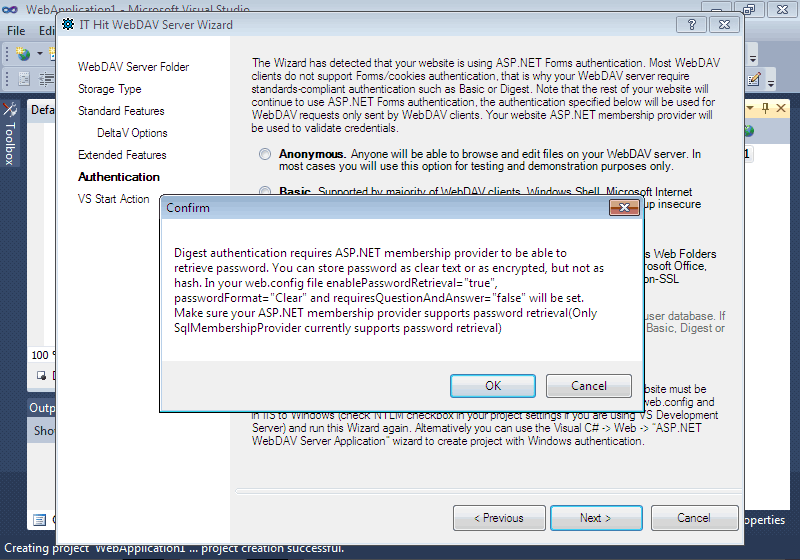 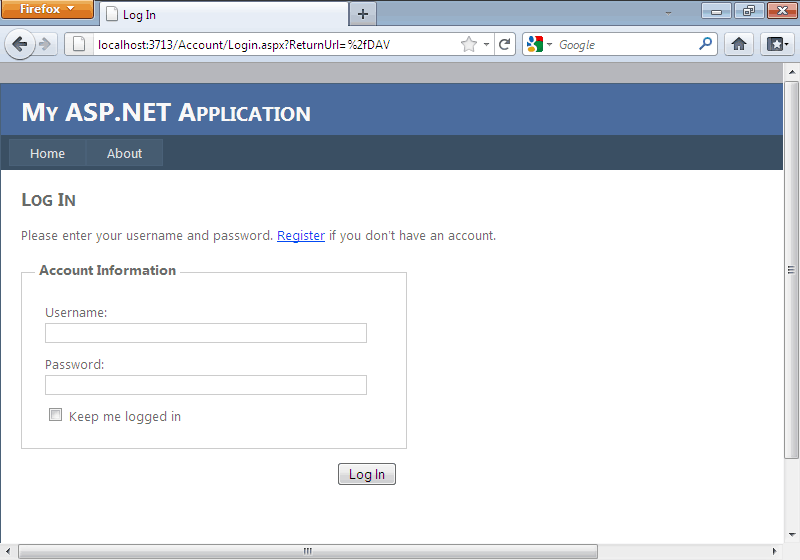 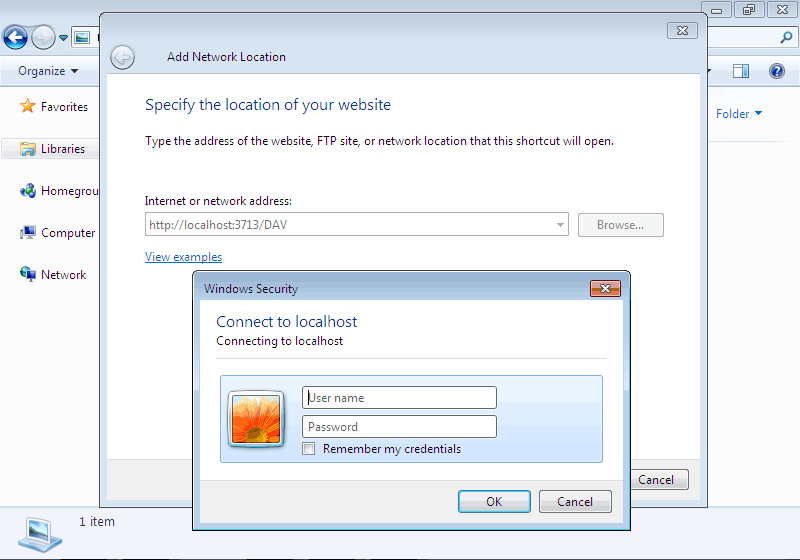 In case of Microsoft Web Folders / miniredirector WebDAV client you will see the following request and response:

The major difference between these two requests is the User-Agent header. If the request is sent by a web browser, the User-Agent header starts with 'Mozilla'. The code generated by the Wizard analyzes this header to detect if Forms\cookies or Digest\Basic should be used:

The Wizard has added Digest authentication module to your Web.config file in two places. <httpModules> section is used if your server is running in Classic mode, while <system.webServer> section is used in integrated mode:

Modifications Made in Your Project by the Wizard

Let's see what changes the wizard have made in your project. The wizard have created the WebDAVServerImpl folder in which it added WebDAV Server Engine interfaces implementations, added \App_Data\WebDAV\Storage\DAV\ folder that keeps files published via WebDAV (the Wizard have populated it with sample files) and created \App_Data\WebDAV\Logs\ folder where log files will be created when you run the server. It also added a reference to ITHit.WebDAV.Server.dll to your project.

Changing the Name of Your Root WebDAV folder

WebDAV Merging in Microsoft Office
Cookies
This site uses cookies and similar technologies to offer you a better browsing experience, for analytics and measurement purposes and to provide social media features. Cookies are also used to develop and serve targeted ads and for similar purposes.